The video of Brazilian icon Pele making a video call from his hospital bed reportedly shows him saying goodbye to his family and friends.

The three-time world champion’s health has gotten worse. He may be seen trying to breathe in a popular video.

The 82-year-old was taken to the Hospital Israelita Albert Einstein in Sao Paulo on November 29, 2022, after having a tumor removed from his intestines in September 2021.

He remained at the hospital on Christmas day with his loved ones by his side. His daughter vowed to be there for him as he receives care in the hospital after his cancer progressed.

In the recent video going viral, Pele is seen surrounded by two ladies who held a phone in front of him while he passed a message across.

British businessman and sports manager Frank Khalid wrote on Twitter: “Pele says goodbye to family and friends from the hospital bed. Football legend, Pele is slowly losing the battle against cancer, family says ‘his condition is worsening even further’. ” 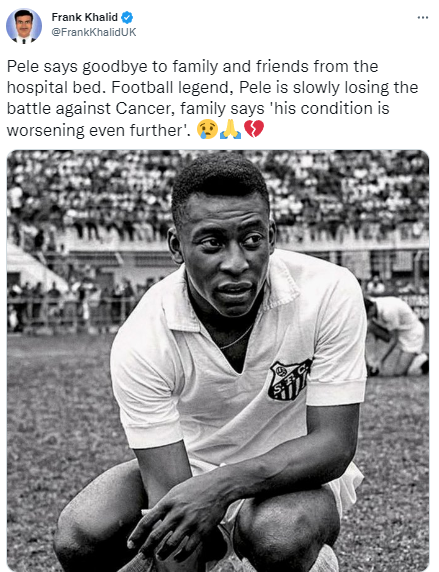 #Pele🇧🇷 says goodbye to family and friends from the hospital bed.

Breaking: Is Pele Dead? What happened to Pele?