Note: we are republishing this story, which originally made the news in May 2016, in light of recent reports that show more and more women around the country are challenging what it means for clothing to be “inappropriate” and fighting back against “conservative” dress codes.

A KTLA meteorologist had an embarrassing moment on live TV when she was told to cover up her dress, which many felt was too revealing (video below).

In a video of the incident, meteorologist Liberte Chan can be seen doing her broadcast while wearing a black beaded dress. Suddenly, her broadcast is interrupted by someone appearing from off camera and handing her a sweater. 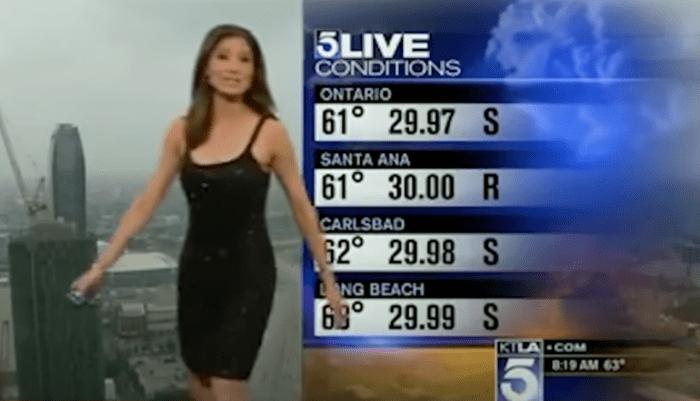 An off-screen voice then tells Chan that the station was “getting a lot of emails” about her dress.

“I look like a librarian now,” a deflated Chan says in response.

The reporter later claimed she wasn’t forced by anyone at her job to wear the gray cardigan sweater, but said that a “spontaneous moment” by a colleague to make fun of her outfit inspired the dress choice.

“I was simply playing along with my co-anchor’s joke,” she said, New York Daily News reported.

“I like my bosses and enjoy working with my coworkers. Since talking to my team, I want our viewers to know it was never our intention to offend anyone.” 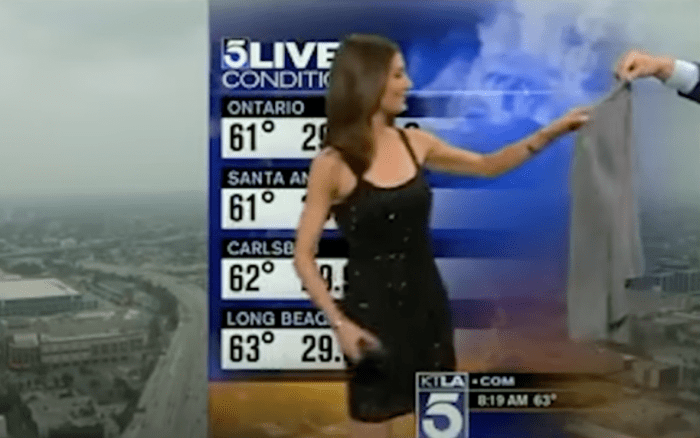 Chan was most frustrated by the fact that she was so heavily criticized about her outfit choice on that particular day, but nobody took note of her accomplished career in journalism.

Co-anchor Chris Burrous, who handed her the sweater, was shown after the incident wearing a similarly strange TV outfit – a suit jacket and tie with khaki shorts that couldn’t be seen on camera.

Borrous said the whole sweater stunt and outfit choice was “meant in jet but I see how it seemed.”

“I really wasn’t offended. People are kind of spinning it and saying it was sexist. I thought it was just funny,” Chan said.

Some viewers felt as though criticism of Chan’s outfit was unwarranted. 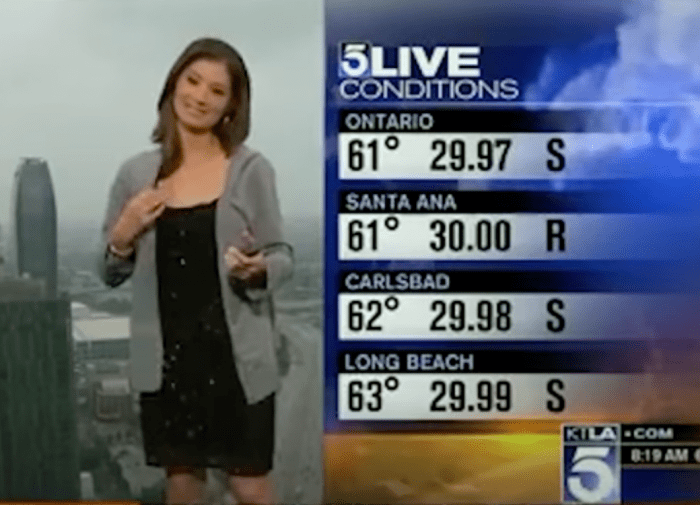 “How rude, she looked fine. Was there a dress code violation ? Perhaps, that’s between her and H/R department. But live TV, sounds like jealousy at the work place Loved the dress, what was her name ? ” Good looking lady” one reader commented on the site’s Facebook page.

Others, however, felt that she should have followed the dress code.

“Every work place has a dress code these days. If her dress was not appropriate she should have been informed when she got to work , not standing before the camera. This was very rude and handled badly!” one reader commented.

“A bit inappropriate just because it is a cocktail dress not a business dress. I would think she would of known better. I bet she was trying to make a statement of some type. There is more behind her reason to wear that particular dress,” another added.

“I lost my right eye, my job, my confidence” – Techie narrates how his life changed after getting attacked by armed robbers (Video)