After travelling via air, land and sea to 72 Commonwealth countries over a 294-day journey, the Queen’s baton arrived in Birmingham City Centre yesterday to scenes of jubilation, as the pride of hosting the games beamed through residents.

Sir Lenny Henry was beaming with pride as he carried the baton from Centenary Square to a celebration event in Victoria Square, where crowds of people were buzzing with excitement.

The 63-year-old comedian also managed to give a shout-out to his home town as he was met with raucous applause in the city centre, saying: “And a shout-out to Dudley in the West Midlands because that’s where I’m from.” 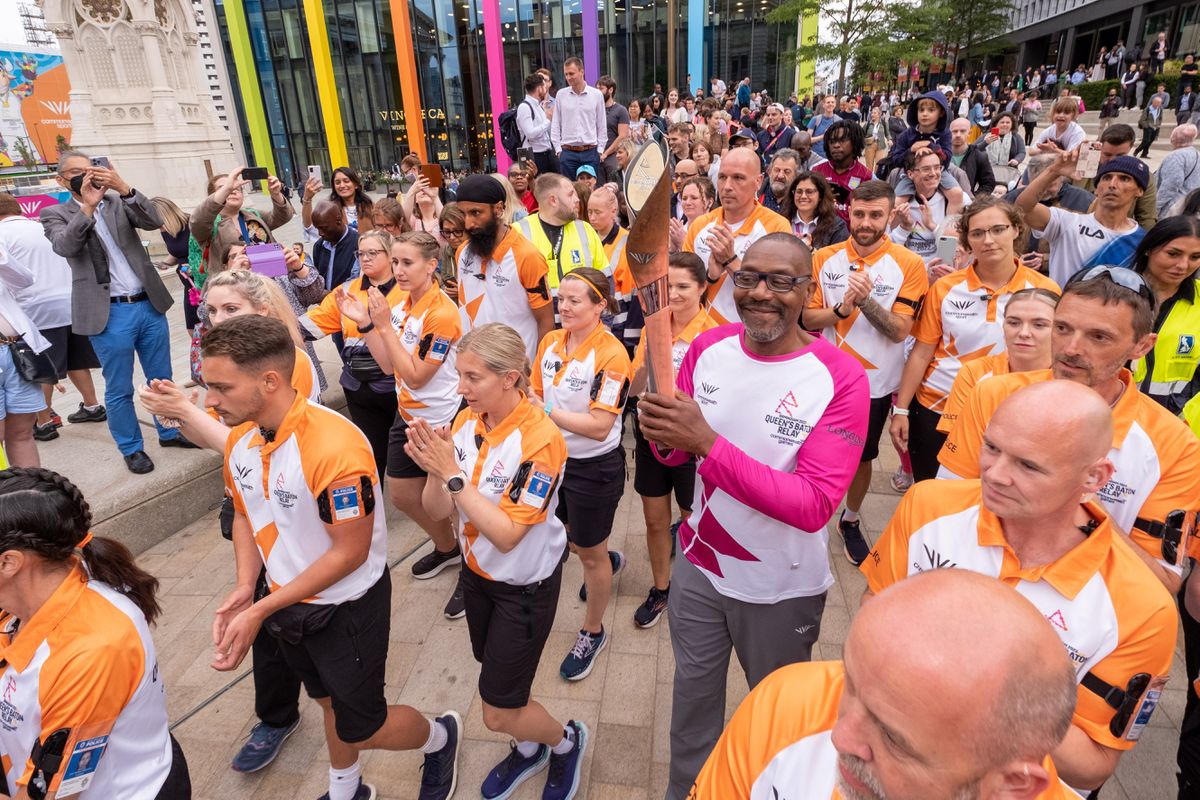 Today, ahead of the opening ceremony, the Queen’s baton will travel through communities in Birmingham that are buzzing with excitement before it heads to the Alexander Stadium to be handed over and mark the beginning of the games.

Communities can be seen buzzing this morning with lots of colour, joy and pride as the region gets set to host the 2022 Commonwealth Games.

The Prince of Wales, accompanied by The Duchess of Cornwall, will represent The Queen at the opening ceremony and officially open the competition tonight at the Alexander Stadium in front of a crowd of more than 30,000 people and an estimated television audience of one billion people.

Athletes will compete in 11 days of sport across the West Midlands and more than one million tickets have been sold for events across the region.

Steven Knight, creator of blockbuster TV series Peaky Blinders, is producing the opening ceremony and has said that it has “real heart” and has promised “it is going to be mind blowing.”

A whole host of performers will be involved in the opening ceremony, and after the dress rehearsal was described as ‘outstanding’, everyone is looking forward to seeing the games launching in spectacular style.

It’s not just communities and spectators that are buzzing with Commonwealth Games fever, West Midlands Ambulance Service (WMAS) has also shared how excited they are about the games.

Approximately 800 members of WMAS staff and more than 20 volunteer Community First Responders will be involved in covering the games – in which there will be 60 ambulances, 27 rapid response vehicles and ten 4×4 ambulances.

WMAS Chief Executive, Anthony Marsh, said: “This is an incredibly exciting time for the West Midlands as we look forward to some fantastic sporting action and welcoming millions of visitors from all over the world to our region.

“We are as well prepared as we can possibly be to respond if and when required, but obviously hope we won’t be needed. My thanks go to all of the staff who have got us to this point and those who will be covering the Games, helping to make them the very best they can be.”

Prime Minister Boris Johnson branded the Commonwealth Games as an opportunity to showcase the “best of Britain” as it gets under way from today.

Prime Minister Boris Johnson said: “The UK rightly has an outstanding reputation for hosting major sporting events, and the Commonwealth Games in Birmingham will be another fantastic opportunity to showcase the best of Britain on a global stage.

“Not only will we be celebrating sporting success, we will also be strengthening the crucial ties between our 72 nations and territories – bringing businesses and governments from across the world together to encourage trade and boost economic growth that will leave a lasting legacy for years to come.

“Good luck to all the athletes competing – let the Games begin!”