The Ghana Police Service says it will trigger its internal disciplinary process to address a misunderstanding over police duties which resulted in heated verbal exchanges between a junior Police officer and his superior in public.

The incident allegedly occurred on the Atwima-Foase road in the Ashanti Region.

A video of the argument between Corporal Boakye, an officer with the Formed Police Unit, and Supt. Albert Quansah, the Atwima-Foase District Commander, has subsequently gone viral on social media.

JoyNews checks reveal the misunderstanding started on the morning of Wednesday, July 20 at a spot between Yabi and Dida on the Atwima Foase road when Corporal Boakye and some members of the FPU were conducting traffic checks.

Sources say the District Commander, who was driving on the stretch in his private vehicle, stopped and advised the men to move from that area of the road to avoid accidents, but he was ignored

Our sources revealed the Commander drove off and returned minutes later in the official vehicle of the District Headquarters, together with the Station Officer and two other officers.

In an ensuing verbal exchange captured on video, the District Commander, Supt. Quansah is seen asking Corporal Boakye to get into the Police vehicle, an order the junior officer declined.

The Commander later asked for his identity and other credentials, but Corporal Boakye is seen mentioning his name and asking the commander to “meet him” at FPU.

District Commander: “I say, get onboard!!”

District Commander: “Give me your number”.

Corporal Boakye: “My number don’t you..ah, this is my name? I’m from FPU”

orporal Boakye: “Meet me at FPU.”

District Commander: “I should meet you at FPU?”

Corporal Boakye: “Meet me there. You are not the one who brought me here.”

Our checks revealed the FPU personnel generated this service message to the commander of the FPU, Supt. Kingsley K. Kawudie:

“The senior officer got to their checkpoints and ordered all the cars to move and go because they are not police officers, they’re armed robbers. After that, the officer went and brought his men that they should disarm the corporal who was engaged with him, and his men failed to do so, so he himself attacked the junior officer and tore his uniforms,” they wrote.

The next day, the Ashanti Regional Police Commander initiated investigations into this complaint against the District Commander. 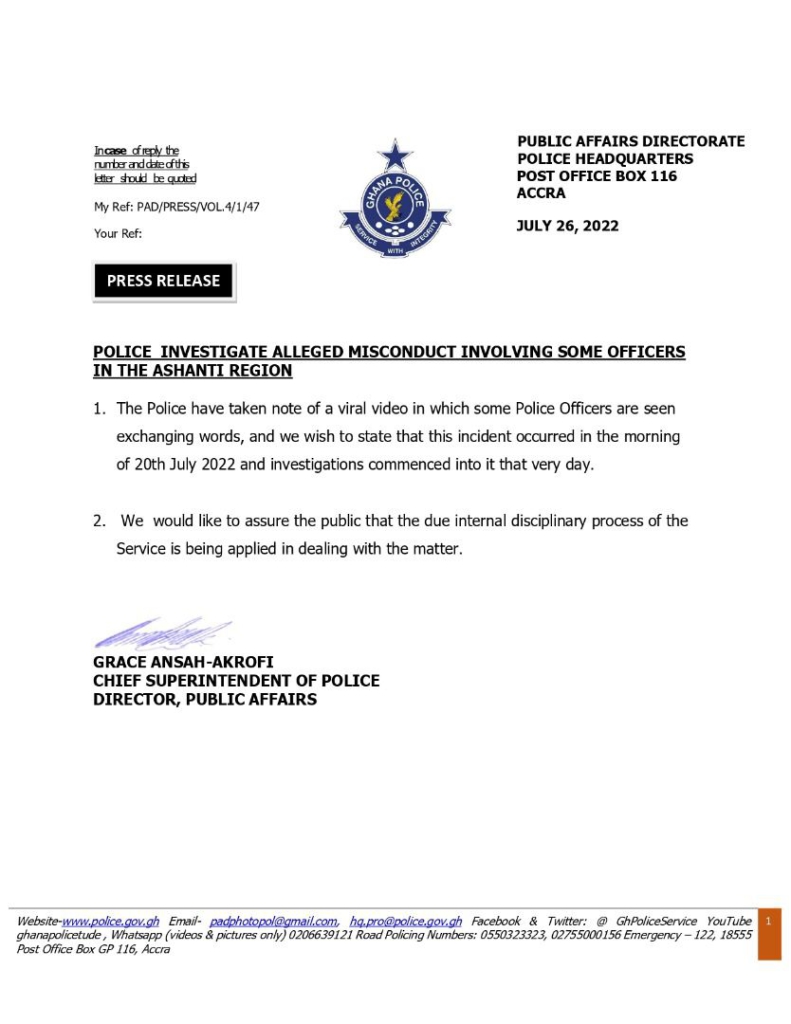 Personnel from the Regional CID and the Police Intelligence and Professional Standards Bureau have been on the case at Foase, visiting the various scenes with the District Commander and other parties.

There are unconfirmed reports that on the day of the incident at about 10:40am, one Chief Inspector Ohene Karikari and eleven armed men from the FPU base in Kumasi stormed the Foase District Police Headquarters and threatened to “shoot the District Commander if he dares harass any of his men again.”